Posted by Anna Rybat on

Yesterday, for those of you who follow my Facebook feed, was the day of the HUGE PLANT SALE at Harvest for the Hungry, the garden at Christ Church United Methodist that gives so much fresh food to Elisha’s Pantry. 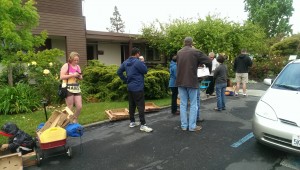 aitlyn and I got there an hour early in order to get a parking space inside the parking lot and to be early in line. We ended up sixth and seventh in line as there are people out there more obsessed about this than we are. They pawed over the list of tomatoes, they yearned for the delivery of the list of peppers, they compared notes that they had downloaded. I counted 127 different varieties of tomatoes and over sixty varieties of peppers.

People looked shocked when I said I preferred to look at the pictures and read the little cards they have stuck in the loose, moist soil as I browsed. Not these folks, they got there early so as to not miss out on one of the plants that they had planned on getting, they dashed and shoved and grabbed and crowed with delight as they set the pot into their cardboard flat before dashing off to their next conquest.

It eased up a bit later on as folks left their prizes at the “we’ll hold onto your plants while you shop” table by which time Caitlyn and I had fulfilled our mission in getting there that early, to get in and out in 30 minutes. After all, there is all of the planting and tilling and fertilizing to do later, in the growing warmth of the day.

I suppose if I did more research then I might have better yields and a more robust crop but truly, it isn’t about that so much as it is about putting my hands into the soil again, like beginning the church year over again, but worshipping at the altar of creation, the fecundity of the soil and the plants that are nurtured in it.

I like building the little ladders out of twine for the beans to climb, the tomato hoops and the trellis for the cucumber vines and apparently this year, for a summer squash that s supposed to be a vining squash so I can utilize vertical place instead of ground space.

It is an exercise in envisioning. I sit in the side yard at my house, there isn’t much sunlight in the back yard and the front yard is full of lowers, I sit on a cooler and think and dream and sharpen the clippers and then set into motion the garden.

Then every morning I get to go out and fuss, and check and pinch and prune and water and weed and watch as something I expected but cannot control, something I know is going to happen but baffles me each and every time takes place.

Little by little at first but then things seem to really take hold and suddenly the tomatoes are six inches higher this morning over yesterday morning, the beans are everywhere, they have grown up the trellis and are now growing back down the twine on the other side, forming a lovely little tunnel of beans hanging down in order to be picked.

The last time there was a discontinuity like this one I had a hard time summoning the same level of intensity once I got back, there was a break in my continuum of care and I had to really work to see the progression as a process instead of a gift, after all when I got back it had already happened, as if someone had come and dug up the garden I planted and replaced it with the garden I found when I got home.

But like any good apple she required some pruning from time to time. And like all good apples she needed a little fertilizer, a little watering, some guidance to grow in a manner that would allow her to take full advantage of the sun in her life. People asked us when she first started talking how it was she got so articulate and I answered “Fertilizer!” Actually I said that we never talked to her in any way that might suggest that we thought she was something other than a real live person, fully formed and capable of handling what came her way.

But I meant to say “Fertilizer!” because that is what that was for her.

Caitlyn is a lovely girl and a lot of that is to her credit but I like to think that years of nurture, of fertilizer and pruning have helped her get to where she is now and will keep helping her grow even further in her life.

We only went to the HUGE CHILD SALE once and we didn’t shop ahead online and didn’t even get there early, but once we got our little bundle of joy home it was time for the work to begin, some of the best work I can think of, and some of the most important because when I am gone the best way for people to remember me is to speak to my daughter and meet me through her.

Both of these stories are stories of shepherding, they only lack sheep to make it obvious. You assume care for a part of creation, be it a tomato plant or an infant girl or a lamb and then you set about leading and guiding and helping it grow, training it to seek the good and shun the evil, to find the sun and avoid the dark places, to grow into our dreams and beyond, in the case of our children, to grow into their own dreams.

I wonder if we in the church have made too much of this Sunday in the liturgical year, this “Good Shepherd Sunday” with its pastoral imagery and its assertions by Christ that he is the shepherd and that we, the sheep of His fold, hear His voice and follow.

It is comforting and it is soothing because all of the responsibility rests on Jesus and we, the sheep have only to follow.

Jesus takes care of everything for us, effecting our salvation on our behalf and allowing that the only requirement for getting in on the blessing is to believe in Him and to confess Him as Lord. Pretty easy when you think about it, after all to defeat the power of Sin and Death the Son of God only had to die and be raised from the dead but all we have to do is to nod a little and accept it.

As if it all happened while we were away somewhere and once we got back, <BAM!> there it was, our faith, fully formed and perfect though we toiled not for its perfection like the garden I came back to a few years ago.

Even more concerning is the notion that this same idea might hold for our kids; that having been raised in the church their faith is this thing that falls from heaven fully formed and perfect, like our salvation itself and that it needs no nurturing.

But after four years of Seminary, I still try and make time to pray every day. After almost a decade in ministry I still make time to randomly pop open the Bible on the stand in my office to a random page and see what the scriptures have in store for me because I know that some days I am firm and resolute in my faith and on others I wobble a bit and need to find the light again, to remember how to light a candle if nothing else so that the light of Christ can return to me.

I know that I am the recipient of a great gift, the greatest gift of all, hard won on the cross and yet I am also the steward of that gift, the shepherd, if you will, of the gift of my faith and the faith of those I know and love within the body of Christ. (that’d be you, by the way)

I fear that we have taken the parable of the good shepherd and turned it upside down so that we think of the gift of salvation as the final product for us and for our lives; that once it is won for us and we believe and are thus saved that we are done.

For the gardeners out there, it’s as if our faith is the vine-ripe tomato, sweet-tart and midday warm as we bite into it and enjoy its perfection.

But really, what was planted within us is just the seed, just the kernel of an idea that, with a little nurture, a little water, a little fertilizer, a little pruning and with a lot of love can bear fruit untold and magnificent.

But only if we take up the shepherd’s crook and learn to tend and to nurture it, to feed it the scriptures and to prune away that which does not build up, both our own faith as well as the body of Christ in general. We need to stop bleating in green pastures and start learning to live as if the salvation Christ won for us has actually changed us and we will live differently from now on.

It isn’t easy. Like gardening there are mistakes made, too much of this or that, not enough of something else. Pretty soon you could find yourself in a monastery somewhere, devoted completely to prayer and seeking the wisdom of God while turning away from your fellow man.

Like child rearing our faith may assert its own will and drag us to a place we had no intention of going and showing us things we had no dream of seeing. Our discomfort may grow so wildly that we miss the fact that our faith is growing alongside it as we grow more sure that we are the hands and feet of Christ on earth until He comes and are bearing great fruit for the kingdom.

How often do we treat it as if we were merely the hired hands, taking it for granted and fleeing when something challenges us or asks of us to see things through the eyes of Christ instead of the eyes we were born with, leaving it to fend for itself, to die or to run wild.

What was planted in the ground was the seed that bore the fruit of salvation for all through faith in Christ Jesus. What was planted in us was that faith which is why we sing “Lord Let My Heart be Good Soil” but we also need to be active about it, to shepherd it, to watch over it and nurture it so that it might grow and bear fruit in the generations to come.

Fruit of the Spirit but also fruit for the creation, fruit for our fellow man and woman, fruit for our children, that what they inherit from us is not less than what we inherited from those who came before us.

Tuesday we begin studying the revelation of Jesus Christ, often called the Revelation of St. John. We almost never read it aloud in the mainline churches but it is a part of the gist of scriptures given to us by God. It is also an excellent place to start nurturing our faith and seeing it grow.