Posted by Anna Rybat on

It is what we notice when there is only so much of something. It is what we say when we notice the emptiness where whatever it was used to be because there is that gap now, the void left when something goes away.

It should come as no surprise that we are occasionally obsessed with things being absent, with things being in short supply, the looming large of the lack of something. We live lives of finite length and that makes us acutely aware that there is a beginning and there is an end and once you get to the end, your time has run out and so we become very good at seeing what once was but what is no longer.

It is good business. I get it. In order for someone to want to buy something they have to notice their need for it, the gaping hole in their lives where it would fit so nicely. Eventually, though, it has led to a media environment where images and slogans and a lot of effort is spent reminding us over and over the things we do not have.

Why? Because somewhere along the line somebody learned how to make the hole in people’s lives so large that they need ever more stuff to fill it, and ever more space to put all of that stuff, and the respect you must have, a larger house than your neighbor, a greater pile of stuff you earned it, you deserve it, and you don’t have it.

I think it is a large part of what led us into the financial crisis of seven years ago. All of the things that make for a life, friends, hobbies, family, faith, sweat, effort, community all got swept away in a mad dash for more, more of whatever it is that was for sale, whatever it was that was on offer that we were told would fill the hole in our lives.

But they had hobbies. My grandfather was a genius at community. He belonged to many, many communities. Friday night poker games, the VFW hall, the Elks club, the group of veterans who got together and bought a house in northern Pennsylvania for use as their hunting camp, the gardeners who leased large plots just outside of town, half-acre plots and tended them after work and on weekends.

And the thing I want to emphasize is that my grandfather was in no way unique. Other people shared all of those activities or they would not, could not be counted as communities to which he belonged. It was the way things were back then. 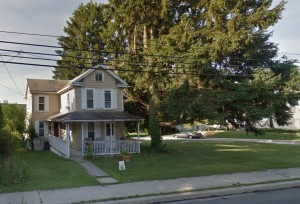 Oddly enough, they all thought themselves blessed. They had happiness and fulfillment. They had friends and loved ones and hearth and home and worthwhile things to do and while certainly there were things that they lacked, they didn’t seem to weigh as heavily on them as they do on us these days, these very different days.

Where did that go? In some ways that is what I crave these days, a community that entertains itself, that feeds itself, that nurtures itself and in so doing, shows the way for others.

Because, and I cannot emphasize this enough, other people are free. A group of folks gather each month here at church to play bridge because they love playing bridge. They talk and socialize and play and compete and cooperate and make and break alliances and the whole shebang can be had for the cost of a deck of cards and a pot of coffee.

And that is the natural way of things. We have been convinced to adopt another way but all the way back to the garden, Adam and Eve were probably not sitting around pining for things that they did not have, they were likely running and skipping and playing and reveling in the freedom from want itself, the freedom from want that comes from things that are without cost, without fee, community, friendship, love and the presence of God.

None of those things are beyond us; none have passed from this world. They are all still there if only we will reach out our hands and grasp them.

They are like the ever flowing fountain that is God’s grace. It is little wonder we have a hard time grasping the eternal and bottomless nature of grace in this world of full, half-full and empty, of commodities we have and commodities we need and the finite nature of life on this side of the veil.

How can it be that God’s love is endless? We should guard what we have lest we lose it!

Churches have spent too much of their time looking at the world through our own eyes instead of God’s eyes, too much time spent thinking that everything has an end and that we might run out or not have enough or any of the other things we say to convince ourselves that our hoarding and grasping and clawing after more and more is the righteous path.

In Minneapolis, where I did my contextual education in a small, grumpy, Swedish (I know that’s redundant, right?) church. Lutherans were once so plentiful that within six blocks of Messiah stood Norwegian Memorial, Augustana Lutheran and Our Savior’s Lutheran Church. Technically, they all exist within a four block radius but who’s counting?

Not once. Not once in the two years I spent there did they work together on anything. Messiah would rather rent a popcorn machine than borrow the one from Norwegian, who would rather cobble together costumes for their Christmas pageant than borrow from the huge costume closet maintained by Messiah due to their history of theatrical productions.

Never did any of the other churches advertise the Taize services at Our Savior’s and they maintained two separate food pantries among the four of them.

One of the things that Pastor Brian from Bethlehem said to me once when we were having the progressive dinners from church to church here in Santa Rosa was that he didn’t want people having the dinner meal here at Faith because his folks might see how nice it is to have wine with dinner, like we do here, as opposed to their longstanding policy of no alcohol except at communion.

Translation, there are only so many Lutherans in town, and we don’t want to lose any.

When did we forget that we are the branches and that Christ is the vine? When did we forget that our power comes from God, not in discreet, measurable quantities that can be counted and that can run out in the end but in a torrent, a flood from above, a fountain that never ceases and will never, can never cease until the ending of things when Christ will be all in all?

When will we remember that we will never run out of grace, that each and every time we go to the well we will return filled to the brim, empowered, saved, forgiven and given the keys to the kingdom, not just the keys to get inside the door, but the keys to start that baby up and give it a drive around?

We have got to let go of the worldview that is based on shortage, on lack, on deficit and start praying for God to open our eyes to the abundance that is ours in Jesus name.

It is not a dearth of money, of people, of hope, of vision, of a future that is holding us back but it is the fear of those things, the inability to move because we don’t know when we will run out and so we hunker down and try and protect what we see as our little patch, what we see as the little we have left from a glorious past.

But in seeking to protect it, in building a fence around it and keeping it safe we are not preventing the grace of God from getting out, we are preventing any more from getting in.

Like the churches in the Phillips neighborhood of Minneapolis, all hunkered down in anticipation of the end of their useful lives, jealously guarding what is theirs instead of wildly sharing what is theirs from God and slowly diminishing because of it, because they could not see that theirs was an inheritance of countless blessings if only they could reach out and take them.

When we look at the world through the lens of what we do not have we miss the carriage passing by carrying the eunuch reading the scriptures and seeking after what is found in them but having no luck, no luck because we have turned inward, not in prayer or in hope but in fear, and will not see him.

We pray and we serve and we live and we worship together, having far more and still using far less than our parents did, our grandparents before them, and we are a community apart only when we set ourselves apart.

It all centers around the word abide, I suppose. I think this gets conflated with the word abode and we think that abiding in the Lord means having the Lord in our houses, in our homes, in our lives but abide doesn’t mean that. It means, if Google is to be trusted, “to accept or act in accordance with” as in advice or, perhaps, in faith.

When we abide in Christ, when we feel the love of God, grace and forgiveness and hope flowing into us as a branch feels its life coming from the vine it is fair to ask, “where did it all go?” but not in sorrow as if something were lost, but in joy at something handed on, passed along to another, instantly replaced and replenished and ready to be handed off again, to be passed to a people, a generation not yet reached.

Abiding in Christ means accepting that the glass is never empty and will never be empty so long as we keep our hand off of the top in an attempt to keep it from spilling out, and instead preventing grace from flowing in.

Where did it all go? That should be a joyful question as we recount the grace that others have felt through us, the places it took us and the people it showed to us, passersby on the highway, seeking something and, having met us, finding it.